Alina’s large family is from Lysychansk 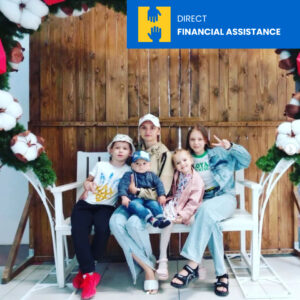 Alina Rayevska is a mother with many children from Lysychansk.

Alina endured the first horrors of hostilities in Luhansk region in 2014 mentally hard, while pregnant with her second child. They left the city for a while but returned. For 8 years, the family got used to long-distance explosions and drills at training grounds outside the city. The couple built a house, planned for the future, and had two more children.

“In February 2022, I found I’m in the same situation again (small infant in my arms). On the first day of the war, we threw blankets in the basement, poured water, and collected documents. And so a month of hell went by. I was very afraid that I would not have time to take all the children down when the shelling started,” — Alina recollects the first weeks of the war.

The family tried three times to leave Lysychansk by shuttle bus. They went nowhere: by bus, by train, living in volunteer centers for refugees. Finally, after a few days, we reached Ternopil.

I felt like my soul was taken out of me with dirty hands. The pain, however, became morally stronger, and I feel as if I have aged 10 years. But it’s the kids who help me not to lose heart… When they wake up in the morning and four pairs of eyes look at me, I just don’t have the right to give up.

Today, a large family with 4 underage children lives in a resettlement center in Ternopil. #Hostline supported the family with targeted financial assistance.