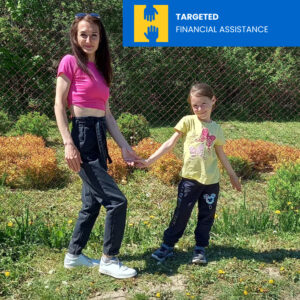 Mariupol is probably one of the most destroyed cities in Ukraine. Galina Kalinina and her daughter Sophia are from there.

The family felt the full horror of the siege of the city: lack of food, collecting rainwater for drinking, cooking over a campfire, living in basements and bomb shelters under constant artillery fire.

A young mother and her 8-year-old daughter decided to travel through occupied Berdyansk to Zaporіzhya. The road was not easy because the Russian military also fired on civilian vehicles.

“We were driving and were afraid to lift our heads. The fear was great for ourselves, the children and parents left in the city, as there was not enough room in the car for them. My heart was torning apart, because they were there without communication,” says Galina.

The family have stayed in several refugee shelters, where they have given seasonal clothing and medicine. A young woman has a medical condition and therefore has to take hormones regularly.

Galina and Sofia are part of a large influx of refugees who have decided to move in search of safety and a place to call home. Today, the family is temporarily living in Vinnytsia and #Hostline has provided direct financial assistance to support them.

Help us continue to support those who have been forced to leave their own home.