Kontsur Lina: now we are nomadic homeless people of Mariupol

Kontsur Lina is a native Donetsker. In 2014, expecting her second child, she was forced to move to Mariupol. 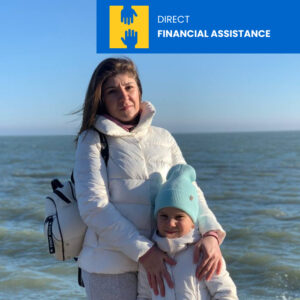 “It was difficult, caught then the shelling in the East. We survived. We settled on the Left Bank on Victory Avenue. And everything seemed to be fine,” Lina says.

In February she and her husband and child were again in the epicenter of the war, but this time the conditions were harsher. They spent a week in the basement of a neighbor’s apartment building. There was massive shelling of residential buildings all around, cars were burning in the yard. The family moved downtown, but that too became dangerous.

“We left Mariupol on March 15, the day before the air strike on the Dram Theater. The road from there was scary. Now we are nomadic homeless people from Mariupol. It’s hard to get a job. It’s also not easy to rent a place to live: either the price is too high or they don’t rent to the displaced. We live wherever they shelter us”, — says the woman.

It is a human right to seek shelter and to be with family. Today Lina lives in Khmelnitsky region in a village with a population of no more than 900 people.

Learn more about #Hostline and direct assistance for families in need of support.