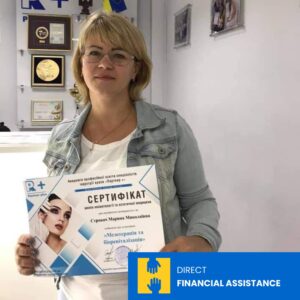 Marina Strokach heard explosions in her own home in the first hours of the war. Because Gorenko, where Marina lived with her husband and son, is in the Buchansky district near Kiev, where the enemy tried to reach first.

Marina’s story is akin to that of many Ukrainians who lived in the Buchansky district of Kyiv. At first they hid and slept in basements, or on the floor by the walls. They listened to every loud sound and wondered how close and dangerous it was. When shelling became heavier and more frequent, and fighter jets and helicopters were constantly circling overhead, we set off to the west, saving children above all else. We drove wherever we could see, with no one we knew or where we were going.

Fortunately there were kind people who helped, guided and supported them. This is how Marina’s family ended up in Boryslav in Lviv oblast. Here in a private sanatorium, which the owners had turned into a shelter for families like Marina’s, they stayed until April, waiting for the liberation of their village, and returned home.

“The windows flew out along with the frames, shell debris battered the roof, the walls, the mangled yard. There is no gas or electricity. But it warms my heart to think that despite all the hardships we are home!” — Marina says.

Now Marina, a nurse by profession, is looking for a job and needs money to rebuild her damaged house.