🏠 Stories → Oksana Podoselnik: With tears in our eyes we drove off

Oksana Podoselnik: With tears in our eyes we drove off 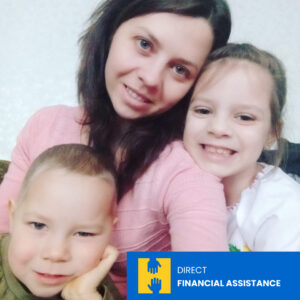 Oksana Podoselnik comes from Lyman region, an area that was rightly called Donetsk Switzerland. There are Siversky Donets River, an abundance of coniferous forests, and blue water reservoirs.

Before Russia’s full-scale invasion, Oksana was a housewife and caretaker of two minor children. The plan was to go to work near home in the spring.

Oksana recalls that during the first month of the war, the family decided to live at home, even though explosions could be heard near the city and the evacuation of civilians was organized. They hoped that the fighting would end soon. However, it did not happen.

“In 2014 we indirectly experienced military events, and it seemed that this time will be the same. Somewhere far away, somewhere outside the city, not in your house… We decided to stay because everything is familiar in the city. My family, my parents, and husband, and our friends are nearby.

Then the neighboring villages began to be bombed and occupied. So the family decided to take their children to a safer place. With tears in their eyes, in complete confusion, but with the hope of a speedy return, they left for nowhere.

At present, Oksana’s family found temporary shelter in the city of Dnipro. They learn news about their hometown only from the media because there is no one to even ask in local groups. There is no gas, water, or light in Lyman today, the city is completely occupied.