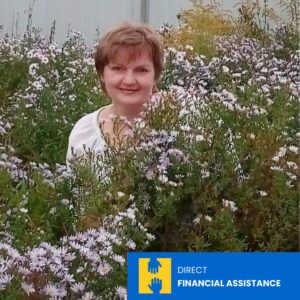 Olena Maznichenko and her family lived in a blooming suburb of Kyiv – the village of Gorenka, Bucha district. It was cozy here, with fresh air, clean private houses, and convenient transportation to the capital.

Olena and her large family lived happily in their home, worked at a local pharmacy company, and made plans for the future. By the time the enemy decided to “liberate” them from their joy and peace and ruin their well-being.

“The war came to us from the first day. It was very scary. We sat until the last and hoped for the best. But we were forced to go to Kyiv to our acquaintances. Though it was not far away, it was much calmer. However, my husband stayed. Since February 25 he joined the local territorial defense and is still guarding our Gorenka and helping to restore life, despite his wounds — he was concussed and lost one eye”.

We returned as soon as possible in early April. The village was completely disfigured. The houses were mostly destroyed or substantially damaged. All the windows were broken or missing, and the roofs and outbuildings were battered. Electricity and gas supplies had been cut off since the beginning of the war. People from neighboring settlements came to the rescue: they gave them cell phones to charge so that they could keep in touch with their loved ones.

Olena does not lose heart, says that material losses are unfortunate, but the main thing is that all her relatives are alive and near. Now it is important for the woman to restore the roof of her house and to collect money for a prosthetic eye for her man.