🏠 Stories → Tetiana Adylbekova from Kharkiv: our people are able to help

Tetiana Adylbekova from Kharkiv: our people are able to help 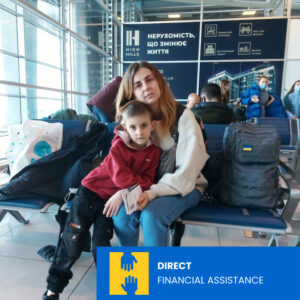 The morning of Kharkiv resident Tetiana Adylbekova, like millions of Ukrainians, began at 5 a.m. on February 24 — with distant explosions and a blaze: it was the Russian army bombing military facilities in Chuguev, located relatively close to Kharkiv.

“I immediately took my father to a private home in the Horizont neighborhood. And it turned out not in vain: after a few days, the residential buildings, kindergarten, school, stores of Horizont began to fly in, and the destruction of infrastructure as of today is horrifying,” says Tetiana.

The family spent several days in the Vostochny neighborhood. Since that time, they learned to distinguish when the “Grads” and when the tanks were working, and they knew what it was like to have a flight somewhere nearby. In the evenings the rumble of enemy aircraft and the sound of rockets over the rooftops became a routine phenomenon.

Tetiana’s nervous system could not stand it, so she left for Zaporizhzhia with her son, leaving her husband and father in Kharkiv.

“For two months, we have been living in Cherkassy region, where we were sheltered by wonderful people. By the way, what the vast majority of Ukrainians are like was a great discovery for me during the war. Our people are participative, able to come to the rescue, unite, share, give/donate their last, and defend their land and loved ones to the last. It’s incredible, and I believe we cannot lose it in this war,”  Tetiana adds hopefully.