🏠 Stories → The artist Irina from Mariupol

The artist Irina from Mariupol 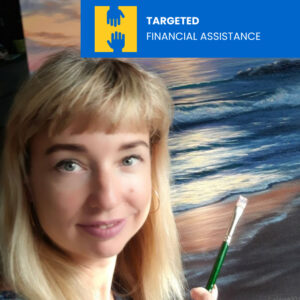 Irina Golovakina has lived all her life in Mariupol. She raised her children there and built a house together with her husband.
In the last years, Irina was engaged in creative work — she painted custom oil paintings.

From the beginning of military operations in the city until March 15, the family held on and stayed in their hometown, in a bomb shelter. Survived artillery shelling and air raids.

“We were near the Drama Theater, caught the beginning of the bombing, including the aerial bombardments, of the historic center of the city. The day after we got out of hell, the Drama Theater was bombed,” is how Irina recalls her last days in Mariupol.

Since March 16, the family has been living in Rivne. They felt a little safer — hope began to appear in their eyes! Hope that life was being restored, despite the images of the horror they had endured.

In April 2022, one of Irina’s paintings was sold at a charity auction by Cultural Resistance and sent to a new owner in Great Britain.

The family has now lost their own home and sources of income. Hostline has provided the targeted cash assistance they currently need to meet their basic needs such as food, shelter, and medicine.

Thank you to everyone who helps us support Ukrainian families and makes donations.