Yevgeniya Kuligina is from the Donetsk, a developing and prosperous city. However, in the spring of 2014, russia resolved hostilities that forced many Donetsk residents to leave their own homes. 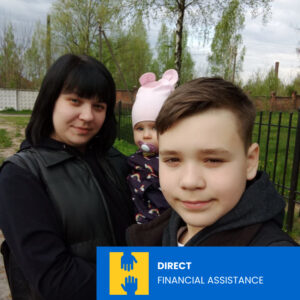 Yevgeniya and her son were among them — the family had to move to Kharkiv. In the new place, seemingly, the woman would be able to recover and feel life again, got married and gave birth to a girl.

On February 23, 2022 Yevgenia’s family joyfully celebrated their daughter’s first birthday with their closest friends. And at 5 a.m. the next day, she found herself for the second time in her life in the war that russia had started in Ukraine. The mother and her two children lived in the basement for two months due the threat to their life. Every day is a struggle for survival. Every day searching for food, drinking water, diapers, and medicine. Luckily, they managed to escape together to western Ukraine.

The family now lives in the small village of Burtin in the Khmelnitsky region and tries to believe that life goes on.